To share your memory on the wall of Fr. Benedict Taylor, OFM, sign in using one of the following options:

Provide comfort for the family by sending flowers or planting a tree in memory of Fr. Benedict Taylor, OFM

Provide comfort for the family by sending flowers or planting a tree in memory of Fr. Benedict Taylor, OFM

Print
Benedict Taylor, OFM, founder and president of Create, Inc., in Harlem, professed vows in 1954. He has been honored by state, city and religious organizations for his work on behalf of the poor.

Although the Franciscan friars from St. Fr... Read More
Benedict Taylor, OFM, founder and president of Create, Inc., in Harlem, professed vows in 1954. He has been honored by state, city and religious organizations for his work on behalf of the poor.

Although the Franciscan friars from St. Francis Church on 31st Street in New York City came every Sunday to my hometown parish in Jersey City, N.J., I did not know them very well at the time. As a high school student and a convert to Catholicism, I usually served the early Mass, while the friars offered the later Masses in this diocesan parish. I felt I had a vocation to the priesthood and wrote to the diocesan seminary and a number of religious orders. They were reluctant to accept an African American first or second candidate.

My older brothers knew the friars and informed them of my difficulty in pursuing my vocation. They invited me to visit St. Francis Church in New York, read literature on St. Francis and write the vocation director. I received a quick response and began my journey in the Franciscan life, where I found generous welcome.

A year after my ordination in 1960, I was assigned to the same St. Francis Church that had first welcomed me. I spent my first years acquiring good preparation for my journey to Harlem. The confessions and counseling brought me in contact with people of diverse cultures, backgrounds and needs.

My ministry at St. Francis was during times of great change in the Church and society. I was in charge of pamphlet/book racks. I placed there the documents from Vatican Council II, and material on liturgy, spirituality and education. I had to read much of this, and thus I was imbued with the spirit of renewal.

The social changes during this period were startling, especially for a person of color. There were strident voices of dramatic change from the African-American community and counter voices from society in general which reached into the friary through the media and the friars themselves.

I fought with the idea of joining Dr. Martin Luther King’s marches, but Dr. King came to us. The Secular Franciscan Order awarded him the St. Francis Peace Medal in New YorkF City. As a Spiritual Assistant of the Seculars, I participated at that award dinner. I expressed my regret to Dr. King that I hadn’t taken part in his work. He responded that the work of peace and justice must also be done within the community, and this is the more lasting and difficult part.

Another area of change was within Holy Name Province. Our provincial chapters in which I participated put greater priorities upon peace and justice and what was termed “a preferential option for the poor.” One of the results was the founding of “new apostolates” or “experimental communities,” to have friars live with the poor and be of service to them in ways based upon the real needs of the poor.

In 1967, a community of six volunteer friars began such a community in Harlem, and I was privileged to be a member. I believe the Holy Spirit was leading me through these events to work with the poor of Harlem. This community endured only for several years, but provided a basis for our province’s response to the call of the poor and marginalized of society, a priority it still seeks to fulfill.

My return to the black community allowed me to see the needs of the poor through the eyes of a Franciscan and the assistance of the Order. Create Inc., the service agency of which I am founder, has grown since 1970 to make a great difference in people’s lives.

My journey would not have been possible without my Franciscan community. Friars participate on Create’s board of directors, and individual leaders among the staff have been deeply influenced by their contact with Franciscanism.

I believe that God sends each of us to rebuild his house in some part of his kingdom. I am grateful that he has sent me on this journey to and with the poor of Harlem as a friar.

— This essay was written while Fr. Ben was at Create Inc. in 1995. It appeared in the December issue of The Anthonian that year.

A wake and viewing will take place on Jan. 12 at 9:30 a.m, followed by a Mass of Christian Burial at 10:30 a.m. at the Church of St. Francis of Assisi, 135 W. 31st Street, New York, NY 10001. Due to COVID-19 restrictions and limited seating capacity, all are strongly encouraged to participate in the Mass of Christian Burial for Fr. Benedict via livestream using this link.

He will be buried at Holy Sepulchre Cemetery in Totowa, N.J.
Read Less

Consider providing a gift of comfort for the family of Fr. Benedict Taylor, OFM by sending flowers.

We encourage you to share your most beloved memories of Fr. Benedict here, so that the family and other loved ones can always see it. You can upload cherished photographs, or share your favorite stories, and can even comment on those shared by others. 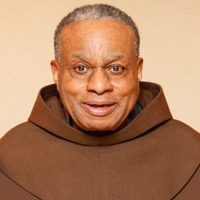