To share your memory on the wall of Joan Samsen, sign in using one of the following options:

Joan’s greatest achievement was raising three amazingly strong children who embody her passion for family and love of life. While loving them endlessly, she was actually most proud of her nine grandchildren, who made her laugh and brought a smile to her face even in the last days of her life. She is survived by her sister Eileen Fitzpatrick of Brooklyn, New York; her son, Jeffrey Samsen (Suzanne) of Armonk, NY; her daughters Caroline Samsen Mueller (Timothy) of Westchester, NY; and Nicole Samsen Lawrence (Morgan) of New York City and nine beautiful grandchildren Karl, Allegra and Willy Samsen; Ally, Sammy and Logan Mueller; Henry, Phillip and Brooke Lawrence.
A funeral service and burial will be held on Wednesday, July 21, 2021 at 10am at Redden’s Funeral Home, 325 West 14th Street, NYC with a private burial at St John’s cemetery immediately following. A memorial mass will occur on Thursday, August 5th at 11am at the church of St. Ignatius Loyola 980 Park Avenue. In lieu of flowers, donations in Joan’s name can be made to the Cure Alzheimer's Fund.
Read Less

Consider providing a gift of comfort for the family of Joan Samsen by sending flowers.

We encourage you to share your most beloved memories of Joan here, so that the family and other loved ones can always see it. You can upload cherished photographs, or share your favorite stories, and can even comment on those shared by others. 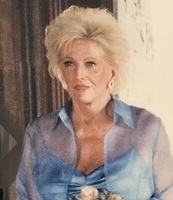