To share your memory on the wall of Nancy Dorsinville, sign in using one of the following options:

Consider providing a gift of comfort for the family of Nancy Dorsinville by sending flowers.

We encourage you to share your most beloved memories of Nancy here, so that the family and other loved ones can always see it. You can upload cherished photographs, or share your favorite stories, and can even comment on those shared by others.

Posted Apr 25, 2021 at 12:36pm
Nancy M. Dorsinville April 1, 1956—April 11, 2021 En todo amar y servir IN ALL LOVE AND SERVE Renmen ak sèvis nan tout bagay NANCY DORSINVILLE served as the Senior Policy Advisor to the United Nations Office of the Secretary General’s Special Adviser on Community-Based Medicine & Lessons from Haiti, and as the senior policy advisor for the UN Office of the Special Envoy to Haiti (OSE) where she focused on vulnerable populations, namely internally displaced populations (IDPs) and in particular gender main streaming, orphans and vulnerable children (OVC) and the handicapped. She was the liaison for the OSE and the government of Haiti (GOH) ministries responsible for these transversal issues. But these accomplishments – work experience and academic accolades of which Nancy has an incredible amount – risks obscuring what everyone found most remarkable about Nancy: her unfailing kindness, humanity and empathy that she brought everywhere, especially to places and discussions that can focus too easily on abstractions. As a colleague and friend who works in human rights shares, “Nancy deeply cared about justice. She would interject into a "neutral" policy discussion about what was feasible, cost- effective, etc. with "but that's just not right..." Born in Haiti, Nancy dedicated much of her love and life to her homeland. Prior to joining the OSE, Nancy was a Research Associate at the Harvard School of Public Health, where her research areas included HIV stigma, health disparities and gender-based violence (GBV). A research fellow at the Harvard Center for Population and Development Studies, her work focused on health and social justice issues within the Haitian diaspora. Nancy had a long standing affiliation with Partners in Health, Dr Paul Farmer, and continued to be part of his Global Health teaching team at Harvard University. She arrived to work the morning before the catastrophic 2010 Haiti earthquake– an event which impacted her deeply. Five of her colleagues perished in the group of eight. Under the Clinton Health Access Initiative (CHAI), she conducted a country-wide diagnostic of the health care system in Haiti in conjunction with the Haitian Ministry of Health (MSPP) and Partners in Health. She has represented the government of Haiti to the United Nations, the World Bank, and the Clinton Foundation, among others and has also served as an advisor to women's program at the UN Academy. As an anthropologist, she lectured on women's health and violence at the Harvard School of Public Health, her research covering domestic violence as a public health concern among Haitian woman. She was the Director of Academic Advisement in Global Health at the Harvard Initiative for Global Health, was an affiliate at the Harvard Program in International Analysis and Conflict Resolution, and a faculty advisor for the Harvard Haitian Students Alliance. Her most recent project at Columbia focused on a “new narrative” amplifying the voices of Hatian-Americans, including highlighting enduring contributions from Haitian culture to the Harlem Renaissance, the Civil Rights Movement, and Black Identity. Nancy’s degrees are innumerable – Only Nancy would have a couple of advanced degrees that she never got around to talking about. As one friend and colleague remarked, “I can hear her up there saying to us now "but, it was really no big deal..." She was a Bell and Kellogg Fellow, Revson Fellow at Columbia, and a MacArthur Fellow at the Harvard School of Public Health. Nancy has presented her work at a wide range of academic and international conferences, at the UN Conference against Racism in Durban on the intersection of migration, xenophobia, and violence against women. New York was Nancy’s home, having immigrated from Haiti as a teenager. She loved the city and the diverse communities that she called her neighbors. Nancy served as director of HIV prevention education for the city of NY and was the Director of HIV/AIDS Prevention at the New York State AIDS Institute. She was previously on the Board of the New York Women's Foundation and Haitian Women for Haitian Refugees. Until the night before her passing – she was volunteering for Safe Horizon, the nation’s leading victim assistance organization in New York City, just as she has done for the last thirty years. Intimately involved in the Catholic life of the city, Nancy was active in numerous Haitian and Jesuit parishes in New York. Wherever she went, Nancy showed kindness, welcoming and extending her hospitality to all, without concern for herself. She served as a Haitian Creole lector at St Patrick's Cathedral and was especially close with the Society of Jesus. She served as a board member of Magis Americas, attended 30-day Spiritual Exercises, and called many Jesuits around the world dear friends. A person of deep faith, rooted in her Catholic upbringing and faith-based schooling in Haiti, she lived out Christ’s message of love. In how she lived and what she pursued, she did what God looks for in all of us (Micah 6:8) – to do good, to act with justice, to love with mercy, and to walk humbly with God. The beloved daughter of the late Fritz and Yolande Dorsinville (Nerestant), Nancy is survived by her brother Ralph (Ellen) and sister Alexandra, and their children Kaitlyn, Derek, Sumaya, and Anisa. 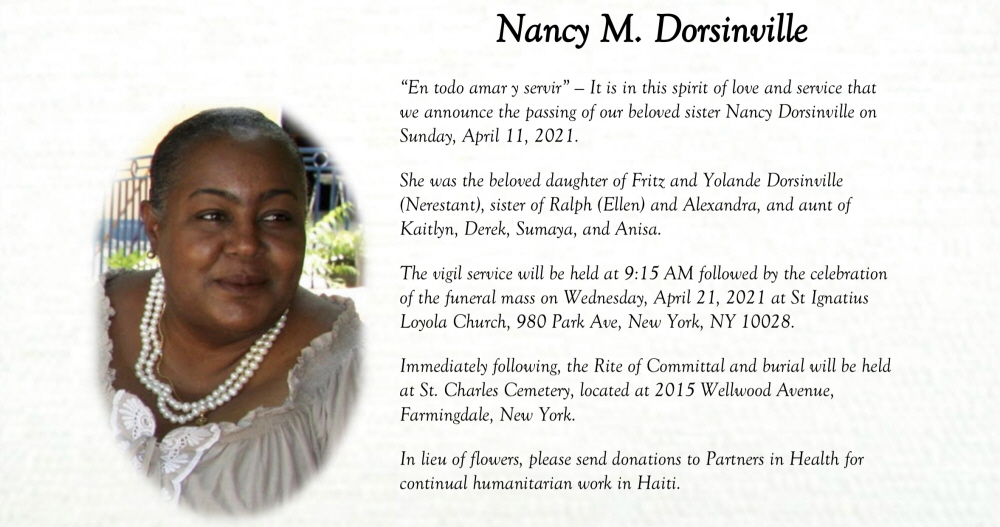 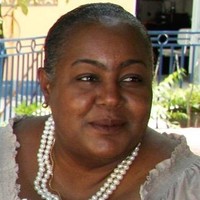 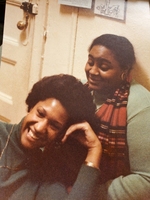 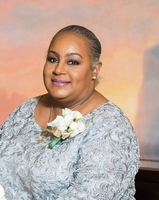